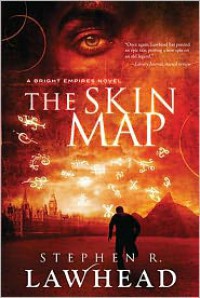 I recently received an electronic copy of The Bone House by Stephen R. Lawhead. I have Mr. Lawhead's quartet on the Arthurian Legend and enjoy his writing. I found though, that The Bone House was the second book in his Bright Empires series and decided to start with the first book, The Skin Map. It appeared that the series was going to be mostly based on time travel, with maybe a historical fiction bent. What I found instead, was an intriguing fantasy story where the characters travel, not through linear time, but to alternate times in alternate worlds, each with their own reality. These realities may be the same as those of the "home world", as our world is called, or they may be different. The concept was intriguing enough to get me to continue with both the book and the series.

In this, the first of the series, the author spends a lot of time introducing and developing his characters, as well as the impetus of the story, which is a series of quests. As such, there is a lot of explaining the reason for the quest, the development of the characters and their stories, and the actual way that the ley travel used by the characters works. At times it may seem that the author is spending more time explaining and less time story telling, but stick with it. It is eminently worth it in the end.

I went from this book directly into the second book, The Bone House, and as I expected, the characters continue to grow and the story becomes more developed. I am now anxiously awaiting the third book in the series, The Well of Souls.